What is Food Poisoning? 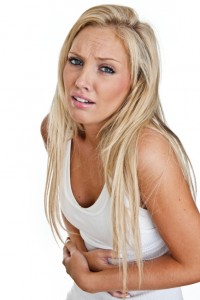 Food poisoning is a common, yet distressing and sometimes a life-threatening problem for millions of people. It occurs most often from:

People infected with foodborne organisms may be symptom-free or may have symptoms ranging from mild intestinal discomfort to severe dehydration and bloody diarrhea. Depending on the type of infection, people can even die as a result of food poisoning.

Food poisoning, also called food-borne illness, is an illness caused by eating contaminated food. Infectious organisms — including various bacteria, viruses and parasites — or their toxins are the most common causes of food poisoning.

Infectious organisms or their toxins can contaminate food at any point during its processing or production. Contamination can also occur at home if food is incorrectly handled or cooked.

Food poisoning symptoms often include headaches, stomach cramps, nausea, vomiting or diarrhea, which can start just hours after eating contaminated food. Most often, food poisoning is mild and resolves without treatment. But some cases are severe, requiring hospitalization. Other symptoms include fever, dehydration and occasionally, blood in the feces

Food poisoning is an adverse reaction to a particular substance, usually bacteria in contaminated food or water that attacks the stomach and intestines, resulting in gastrointestinal upset. Salmonella, Campylobacter jejuni, and Staphyloccocus, which affect poultry, raw meat, untreated milk, and duck and hen eggs, are some of the more common types of food poisoning. E-coli, found in undercooked meat, untreated milk, and contaminated water, is a slightly rarer cause. Norwalk virus, found in raw shellfish, salads, and contaminated water, is a common viral cause of food poisoning. In more serious cases, the bacteria may enter the lymph tracts, which carry water and protein to the blood, and the blood itself. Children, pregnant women, the elderly, and people who are already ill or have weakened immunity are particularly vulnerable to food poisoning and may get a serious infection. The symptoms of food poisoning vary quite markedly in intensity, and can range from slight to life-threatening. Most attacks are mild, with symptoms lasting between one and three days.

Please contact your doctor if diarrhea due to food poisoning continures for more than 24 hours, you have severe stomach cramps, there is blood in the feces, there is a fever of 100 degrees F or higher, or there are any signs of dehydration.

Your doctor will make a diagnosis based on the length of time elapsed between eating the contaminated food and the first sign of symptoms. Determining whether a fever is present also aids in diagnosing the type of bacteria causing the food poisoning and therefore influences the treatment.

A home oral rehydration solution can be mixed with sugar, salt, and baking soda. This makes a solution very similar to the intravenous fluids administered at the hospital for dehydration. Mix 1 liter of filtered water, 2 tbsp of sugar, ½ tsp of salt, and ½  tsp of baking soda. Sip the solution throughout the day until urine is a normal color and urination occers four to five times a day. 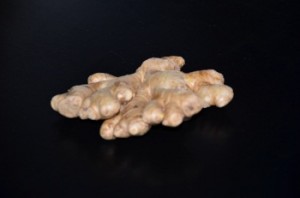 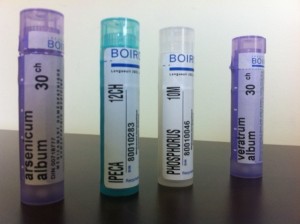 Food Poisoning is a perfect example of an acute condition where homeopathic support can be of immense value in speeding-up recovery. The remedies listed below are some of the most commonly used. There are many others.

If you are not sure which remedy is best indicated in your particular case; ask your homeopath to choose the right remedy for you.

If there is marked thirst for cold drinks that initially stay down, but are then vomited up as soon as they are warmed by the stomach, use phosphorus. There is a high level of anxiety when feeling nauseous that is eased by reassurance from a calming, soothing person. Diarrhea is painless but may be severe, especially in the evenings, when there is a real difficulty in controlling bowel movements.

For a particularly intense sensation of nausea that leads to episodes of vomiting that do nothing to relieve the awful sensation of sickness, even temporarily, use Ipecac. Nausea is aggravated by movement of any kind, or by stooping and bending forward. Although patients bring up frothy vomit frequently, there is an unusual lack of thirst when this remedy is helpful. The abdomen feels sensitive and distended with spasmodic colicky pains, and there is an unpleasant, constant urge to empty the bowels.

This and the remedy that follows are specific for situations where diarrhea and vomiting occur simultaneously. Classic symptoms include burning pains in the stomach and abdomen that are temporarily eased by small sips of warm drinks. Contact with warmth in general is very much desired (with the exception of the head and face), since there is a pervading sense of being chilled to the bone. Feelings of anxiety when ill do not respond to the strongest reassurance, and can develop into a feeling of being unable to recover. All symptoms are most intense at night.

This is another strong candidate for treating vomiting and diarrhea that occur together. Symptoms include exhaustion to the point of prostration after vomiting and/or diarrhea. The skin appears exceptionally pale and feels clammy to the touch. There is also a characteristic thirst for cold water, which tends to be vomited up very soon after it has been drunk. Moving around intensifies that distress and intensity of nausea.

A well-chosen homeopathic constitutional remedy that considers the person holistically, that is, not only the physical symptoms, but their mental and emotional states as well, will be very beneficial to any suffering from food poisoning, because it is the most individualized medicine you can get. Just think, out of more than 4,000 different remedies there will only be a handful or two that will be suited to the individual. This is precisely the reason why we have good results in homeopathic treatment. A remedy that resonates well with a person’s energy has the power to effectively support the body in its efforts to heal itself.

Please feel free to call the clinic to book an appointment or to come in for a free 15 minute information session. We would be happy to answer your questions.

Separate raw food from cooked food, and store raw food at the bottom of the fridge to avoid juices dripping down and contaminating other food. Make sure that the temperature of your fridge is below 41 degrees F and your freezer below 5 degrees F. Cover all food with lids, tin foil, or plastic wrap. Do not store food in opened tin cans.

Buy hot and cold foods at the end of your shopping trip, and keep them separated. Take your shopping home quickly and unpack it immediately. When eating out, check that serving staff use separate tongs when handling separate food types, such as meats and vegetables.

Wash your hands in warm, soapy water for at least 30 seconds before preparing food. Cook poultry until the meat is white, cook hamburgers and sausages right through until their juices run clear, and cook white fish until it flakes easily with a fork. Do not eat food that is past its use-by date, and avoid food in swollen, dented leaking, or damaged cans, containers, or other packaging.

If you have any comments regarding this article or are interested in coming in for a free 15 minute information session on homeopathy, please call the clinic at

Dear patients, It has been a little more than a month since my last post on COVID-19 and I thought that this Easter weekend would be a good time to touch base again. First of all, I do wish you and your families all the very best for this Easter holiday. What a different one it is though, compared to what we are used to. We can’t have the traditional family gatherings and Easter egg hunts, or even go to […]