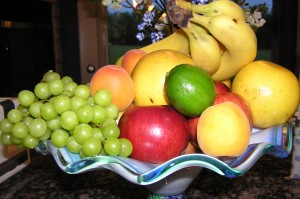 Antioxidant foods and the body systems they boost.

Good looks and self-esteem seem to be more important than ever these days. We want to look and feel our best at all times and some of us will spend a great deal of money on beauty treatments like facelifts, wrinkle treatments and skin tightening -just to look younger. Fact is that while some of these treatments may improve your appearance for a while, real beauty comes from the inside.

In homeopathy, homeopathic medicines are designed to do just this – heal from the inside out. When you are feeling good on the inside, it will show on the outside because you are radiating this positive energy.  This great system of medicine developed by the German physician Dr. Samuel Hahnemann in the late 1700’s treats a person holistically, that is, it incorporates not only your physical symptoms but your mental and emotional states as well, in order to arrive at the curative remedy.

But the remedy alone will not do wonders if you do not observe the basics of hygiene, as Hahnemann called it. What he considered as basic hygiene and attached great importance to were the necessities to good health such as getting enough fresh air, bed rest and sunshine, hygiene in the sense of cleanliness, and observing a proper diet.  Already back in 400 B.C. Hippocrates said: “Let food be your medicine and medicine be your food”.

So, further to last month’s article on staying young and strong with the power of plants, I will now give you some information on the most important anti-oxidant healing foods. But first, some facts.

Phytochemicals are more powerful in a natural combination

Red wine, for example, which has the polyphenol resveratrol in it, also contains a whole range of other polyphenols.  While they unfold their antioxidant action as individual substances on the one hand, they promote and support each other on the other. In the meantime, there are more than 500 components that have been found in red wine. Apart from polyphenols, it also contains proteins, sugar, acids, minerals, trace minerals and aromatics.

Two Canadian scientists, Prof. Dr. Richard Béliveau and Dr. Denis Gingras of the Laboratory of Molecular Medicine, Hôpital Ste-Justine in the Cancer Research Centre of Montreal, wrote in their book on food for an anti-cancer diet: “Because of its positive effect on the heart and vascular system, its protection against the development of cancer and its capability to prolong cell life, resveratrol, among all of the molecules available in food, is probably the one most suitable to be recommended for human health”.

This is how healthy fruits and vegetables really are

The countless phytochemicals which we consume with fruit and vegetables, vegetable oils and nuts can help us stay young, healthy and energetic. Not only because they are effective anti-oxidants – their repertoire is much greater. It is generally known that they contain important vitamins and minerals. But they also have an antiseptic and anti-inflammatory effect, they can lower blood pressure and cholesterol levels, and kill off bacteria, viruses or fungi.

But most of all, they are important helpers in the fight against cancer in three ways: by neutralizing and removing carcinogenic substances, either by inhibiting the growth of cancer cells or by removing them  in that they prevent the development of blood vessels, which a tumor needs for growth.

Dr. James A Duke, long-term director of the USDA Medicinal Plant Laboratory in the U.S. Department of Agriculture, gathered some stunning insights into the healing powers of plants. Thus, he writes in his book “Healing Foods” for example, that blueberries have shown to be just as effective in reducing cholesterol  than the pharmaceutical substance Ciprofibrate. Capsaicin, to which chillies owe their hotness, turned out to be a better COX-2 inhibitor (an enzyme responsible for inflammation and pain) than Vioxx (now off the market) and thus to be an effective relief for osteoarthritis pain.

Blueberries have proven to be effective cholesterol reducers in clinical studies. They also have cancer inhibiting properties 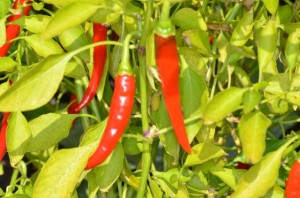 Among others, the hot substance capsaicin contained in chili peppers is very helpful for osteoarthritis pain.

So why not switch over from crackers and chips to nuts and dried fruit? Walnuts supply us with valuable omega-3-fatty acids and serotonin. The recommended daily dose of vitamin E can be met for example by eating 60 g of almonds. The daily requirement of zinc and magnesium is met by eating cup of cashews, and two to three Brazil nuts have the amount of selenium we need.

If you are on an all-around full-fledged diet, then there is no need for food additives – at least according to many experts. But who really is?

According to the Canada Food Guide, adults should have 4 servings of vegetables and 3 servings of fruit per day. However, statistics show that the average Canadian consumes only half of the recommended amount. Additionally, because of intensely farmed and depleted soil, our food today has far less wholesome ingredients.

You also need to consider that requirements may vary from person to person. For example, smokers need 40 % more vitamin C than do non-smokers. But other factors like age, sex, weight, health status, digestive disturbances, convalescence, reduction diets or pregnancy play a role too. What is important is that dietary supplements should be of natural origin and taken according to individual requirements.

Healing Foods for the most common diseases of civilization – particularly cancer

Apart from numerous polyphenols, it is in particular the sulphur containing isothiocyanates with their uncrowned king, sulphoraphane, that’s of benefit. It has antibiotic and antibactericidal powers, amongst others against Helicobacter pylori, the bacteria that causes stomach ulcers. It also has the capability to trigger the “suicide” (aptoptosis) of cancer cells. Broccoli, the cabbage with the highest content of sulforaphane, is therefore one of the most important foods for the prevention of different types of cancer.

Just like with the cabbage, it is mostly the sulphur compounds that are responsible for this. For example, diallyl disulphilde has anticoagulant properties and ensures a homogeneous blood flow.

Garlic, the most potent agent in the allium family, is known for its antiseptic properties. It contains more than a dozen defense increasing compounds that can effectively combat infection. But most importantly, garlic and co. can inhibit the growth of cancer cells, neutralize carcinogenic substances in the body and help to remove them.

They are low in fat, rich in protein and full of soluble dietary fiber. Already for this reason alone they are a valuable food and a healthier alternative to animal sources of protein. But what makes them especially valuable to our health is their content of isoflavones, also known as phytoestrogens because they are very similar to estrogen, the female sex hormone. Isoflavones can relieve complaints of menopause, reduce the risk of heart disease, and strengthen the bones and prostate. But most of all, they can block enzymes, which are very active in the multiplication of tumour cells, thus stopping cell growth. The best results have come from soy beans, especially for breast and prostate cancer.

About a third of a tea leaf consists of catechins, a subgroup of the polyphenols. Their most important agent, with the greatest cancer inhibiting potential, is epigallo-catechin-gallate (EGCG). Numerous laboratory tests showed that EGCG inhibits the development of many tumours. In particular those of skin cancer, breast cancer, lung cancer, esophageal cancer, stomach cancer and colon cancer.  And this already just by regular consumption of green tea. Three cups over the day should be enough. Japanese green tea should be favoured as that has more cancer inhibiting agents. To ensure that they are thoroughly dissolved, you should let the tea seep for at least 8 to 10 minutes.

Raspberries, strawberries, currants, gooseberries, blueberries, blackberries, cranberries and goji berries clearly belong to the oldest foods of man. They taste delicious and are a rich source of phytochemicals. All of them are highly active antioxidants, with blueberries leading the way. Cranberries are antibacterial for bladder infections.

The ellagic acid, a polyphenol  which is present in raspberries, blackberries and strawberries, can inhibit the growth of cancer cells. Another group of polyphenols, the anthocyanins, which is responsible for the blue colour of the berries, could kill tumour cells in the laboratory, and the substance delphinidin, which is present in blueberries, could stop the formation of blood vessels which a tumour needs for its growth.

They all contain lots of valuable protein, healthy unsaturated fatty acids, dietary fiber, vitamins and trace elements. Pumpkin seeds contain the amino acids alanine, glycin and glutamic acid which are good for the prostate and inhibit its enlargement. Walnuts, which contain omega-3 fatty acids that prevent heart disease and relieve inflammation reaction, also contain lots of serotonin, which elevates your mood and can also be helpful for winter depression. Almonds are a good source of vitamin E. Cashews provide us with zinc and magnesium, and Brazil nuts with selenium. However, because of their high fat content they are all rich in calories, but this should not deter you based on their valuable ingredients.

Chocolate has so many positive active ingredients that you could put it in your medicine cabinet. Apart from various minerals, it contains theobromine and phenylethylamine, as well as the serotonin precursor tryptophan – all of which can elevate your mood. Studies have also shown a blood pressure lowering effect, as well as an increase in “good” HDL cholesterol and a decrease in “bad” LDL cholesterol.

But most of all, because of its high content of polyphenols, it has a strong antioxidant power.  One cup of chocolate contains as many antioxidants as three cups of green tea or two glasses of red wine. The bad news: milk chocolate with lots of sugar does not have this effect. It has to be dark chocolate, with a cocoa content of 70 %. 25 g of this per day are then enough in order to have a health-promoting effect on chronic illnesses such as cancer or heart and vascular diseases. 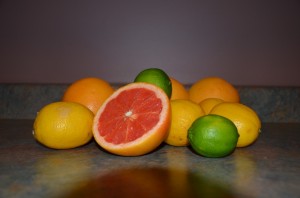 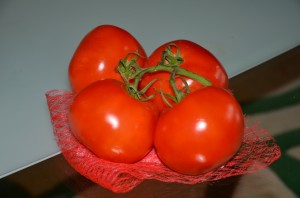 They contain a carotenoid by the name of lycopin, which is responsible for their red colour and which has a particularly strong cancer inhibiting action. But it must be extracted from the cells by cooking. The content of lycopin is highest in tomato paste. Two meals per week of tomato sauce are enough to reduce the risk of prostate cancer.

This chief ingredient of Indian curry blends has antioxidant properties (many times more than vitamin E) and anti-inflammatory properties. It reduces cholesterol and the risk of thrombosis. Its bioavailability is small, but can be increased by a thousand fold by way of adding pepper (as usual in curry mixtures).

It contains lots of vitamin C, as well as a number of anti-oxidant carotinoids like lycopin, beta-cryptoxanthin and beta-carotin. Chili peppers can improve blood circulation with the help of the substance capsaicin, which is what makes them hot. But it can also help with losing weight and for colds. It can also protect the stomach and ease arthritis pain.