Staying young and strong with the power of plants

Antioxidants in the fight against those “molecular outlaws”

Whether it’s anti-aging you’re concerned about or cancer prevention –there are ever more powerful substances being discovered in fruit, vegetables and herbs that are making us healthy and strong. 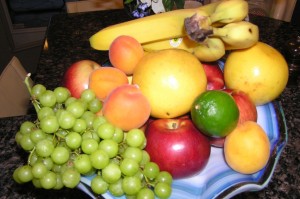 Latest research finds that we have the power to directly influence our aging process. Aging, therefore, is not “fate”! It is the primary goal of preventative medicine to point out individual health risks, offer comprehensive consultations, promote health consciousness and give practical tips for staying young. In this article, I would like to put special emphasis on the power of anti-oxidants and how they can keep you young by eradicating those free radicals.

In the early 90’s, a phenomenon made headlines that appeared so unusual to experts that they called it the “French Paradox”. It centered around observations by epidemiologists who had noticed that in France, particularly in the Southern part of the country, the heart attack rate was 30 – 40 % lower than in other European countries and in the USA. And this in spite of the French diet, which is not considered particularly healthy. When looking into the possible causes for this fact, a surprising discovery was made: It was the consumption of red wine of the people of Southern France that protected their hearts, thanks to a substance called Resveratrol, which there is plenty of in red wine.

Meanwhile, the wonder drug transformed the (moderate) consumption of wine almost into a medicine, protecting against heart attack, thrombosis, cancer and arteriosclerosis. But it also reduces tooth decay bacteria and protects against gingivitis – at least that’s what a number of scientific studies have proven. Resveratrol was identified as a “biological multi-purpose weapon”. An American publication even named it the “Swiss army knife of nature”.

By the way, the interpretation of drinking “moderately” can be very individual. It is therefore advisable to stick to the recommendations of the WHO: The consumption of 20 g of pure alcohol per day for men, resp. 10 g for women, is harmless. 20 g are the equivalent of approximately a 0.5 l bottle of beer or 0.2 l of wine. Careful: drinking 3 glasses of wine per day will increase your risk of heart attack! Positive effects yes or no: Experts recommend at least two alcohol free days per week.

The substance resveratrol belongs to the so-called secondary plant products from the large family of polyphenols. It is found primarily in the skin and seeds of red grapes. During red wine production, in which the grapes are fermented with the skin, alcohol releases the resveratrol from the skin, transferring it into the wine where it unfolds its beneficial action.

At the core of resveratrol’s remarkable abilities is its antioxidant power. This means that it can melt down the dreaded “free radicals”.

Free radicals are partly responsible for a vast variety of diseases, including heart and vascular diseases, cancer of the lungs, cervix, skin, esophagus, stomach, intestines and prostate. But also for cataracts, aging processes and Alzheimer’s.

In the past, free radicals have been classified as “the enemy within” and “molecular outlaws”. Dr. Denham Harman, a professor at the University of California in Berkeley, published his theory on biochemical aging already back in 1956, where free radicals play a major role (Free Radical Theory of Aging, FRTA). It says that because the free radicals are robbing molecules of their electrons, molecules which are important for the cells get damaged, namely the nucleic acids DNS and RNS, as well as a number of proteins and lipids as mentioned before.

Over time, this defective “molecule garbage” accumulates in the cell impairing its function, which in turn leads to the corresponding aging processes. As well, in Dr. Harman’s opinion, most illnesses are in reality nothing but symptoms of accelerated aging.

How aging processes can be stopped

While the theory of free radicals was rejected by many gerontologists early on, it has become widely accepted in the meantime due to a number of indications speaking for it. There is, for example, the finding confirmed by many studies that vegetarians are healthier and have a higher life expectancy than do non-vegetarians. Their diet, consisting primarily of fruit and vegetables, contains more antioxidants (in the form of secondary plant products) than that of the average person.

Also, there is the fact that highest life expectancy world-wide is to be found in Okinawa, the Japanese “island of the hundred-year-olds”. In Ogimi, a village in the Northern part of the island, we find the oldest, while healthy, people on earth. Out of the population of approx. 3,500, 450 are older than 80 and a dozen are over 100 years old – a world record.

An extensive scientific study of the hundred-year-olds (“Okinawa Centenarian Study”) showed that their blood has a very low rate of free radicals. Their cholesterol and homocysteine levels are also much lower, and their risk of heart attack is 80 % lower than that of Europeans and North Americans. They have 80 % less breast and prostate cancer, 40 % less hip fractures (which speaks for their solid bone structure) and also dementia is to be found much less among this group.

The secret to a long life

The fact that their biblical age and good health clearly have to do with lifestyle, is proven in that other residents of Okinawa, who are living in the larger cities and have adopted American eating and lifestyle habits, are just as heavy and sick as their “models”, and do not reach an exceptional age either.

Characteristic of the lifestyle of the hundred-year-olds of the island is mostly their diet which consists of little meat and salt, but plenty of fruit and vegetables– mostly grown in their own gardens. Furthermore, they eat seaweed, kelp and fish from the ocean, and their primary drink is green tea. They don’t smoke and are physically very active. They also practice an eating habit called “hara hachi bu”, which means that they eat only up to the point where their hunger is satisfied by about 80 %.

Age researchers explain this phenomenon by the lower metabolic rate which causes less free radicals to develop, thus depositing less molecule garbage into the cells which would cause you to age.

So it is no wonder that we find many dietary supplements containing the therapeutic power of anti-oxidants. But while some studies showed a positive effect on health from vitamins, others had a negative effect, and yet others showed no effect at all. If there is anything to be concluded from this, then it can only be that the dietary and lifestyle habits of the participants play a greater role than do the supplements!

Illness, just like health, is a holistic event that affects the body, mind and spirit. Vitamins are neither a replacement for a full-fledged diet nor for mental hygiene. But this is not to say that for certain conditions, on the recommendation of your doctor or natural health practitioner, you shouldn’t take them.

In a healthy person who is getting enough exercise and relaxation, and whose diet is for example full-fledged Mediterranean, there will be a balance between free radicals and anti-oxidants (those which the body makes on its own and those ingested with food). Our body is in danger only when there is an excess of free radicals – when it is under oxidative stress. This develops gradually as the result of an unhealthy lifestyle, which includes for example cigarette smoking, consumption of alcohol and medication, air pollutants (car exhausts, ozone), exposure to radiation (UV, electric smog), or excessive physical and emotional demands. And not to forget our typical diet consisting of too much meat and not enough fresh fruit and vegetables!

How K-W Homeopathic Medicine and Wellness Clinic can help

While conventional medicine typically concentrates on the treatment of, for example, high blood pressure, disorders in fat metabolism, diabetes, etc., the causes for or prevention of these complaints are often not addressed. Our approach to care is of a holistic nature, incorporating the emotional and mental aspects as well – because we want to know exactly why your blood pressure or cholesterol is high in the first place, or why a heart attack happened. A well-chosen constitutional homeopathic remedy will often help to put you on the right track by making good choices. If you recognize the potential for a future chronic illness in time, you can take the appropriate steps to prevent it.

Our Nutri-Body Analysis will further uncover any nutritional imbalances. Once you know which dietary recommendations and supplements are likely to be of most benefit in your unique case, it will be easier to focus on eating the right foods to bring your body back into balance.

Our next article will follow up with information on the various antioxidant foods and what body systems they boost.

Questions or comments? Please give us a call or e-mail us, or come in for a free information session. We are here to serve you – with passion and compassion.